Trees and Logs: Discipleship in Time of War

Today’s texts can be read as something of a manifesto for the following of Christ, written not in the doctrinal formulas that will characterise later centuries, but in resonant images and metaphors taken from the non-human world.

Isaiah, for example, writes to the Hebrew survivors of the exile in Babylon, promising them that the word of the Lord will be for them like rain or snow that waters the earth and makes it fruitful. Just as there is joy when seed is plentiful and the baker is able to make bread in abundance, so the word of the Lord will bring joy and peace to the exiles. On the other side of all the devastation they have endured, the returning exiles will be like strong trees, Cyprus and myrtle, a sign that God’s favour is with them. 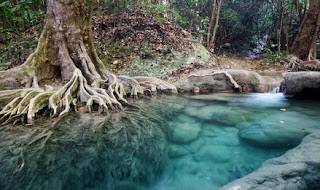 The psalmist also speaks about joy, about the making of glad music as a response to the good and faithful work of God in his or her community. The psalmist rejoices in the strength she or he has received from the Lord, again invoking the image of a large and fruitful tree, this time a palm or a cedar, which reminds the poet of the steadfast support of God and the joy it inspires.

Even the resurrection discourse from Paul’s 1st letter to the Corinthians can be read as a riff or midrash on the world of trees and their fruitfulness. The language of sleeping and then rising was common parlance in the ancient near east for the moment when a seed that has lain dormant in the earth crack open and put out a shoot, rising miraculously out of the earth to reach towards the heavens and life. What was dead, is now alive.

There are few poets who have explore this connection between trees and resurrection more wonderfully well than Rainer Maria Rilke, who writes:

I find you, Lord, in all Things and in all
my fellow creatures, pulsing with your life;
as a tiny seed you sleep in what is small
and in the vast you vastly yield yourself.

The wondrous game that power plays with Things
is to move in such submission through the world:
groping in roots and growing thick in trunks
and in treetops like a rising from the dead.

Wonderful stuff, hey, and far more joyful in its expression than the Nicene Creed! So, if we take Rilke and St Paul and the Psalmist and Isaiah all together, what are they saying? What is their advice, their message for believers, their manifesto? Just this, I think: God is steadfast and faithful; God has your back. So, rejoice and be glad! Put your roots deep in God and reach for the heavens with the life that God so richly shares.  Good advice for the baptised, I would say. Good advice for anyone!

Rilke’s paradoxical inference that the power of God moves with a certain ‘submission’ through the world gives us occasion, though, to turn to our gospel reading, which has a decidedly different mood.

Luke is concerned with those in his community whose joyful discipleship has turned sour and become just that little bit self-serving and even hypocritical. So, if, like me, you’ve ever been guilty of proclaiming certain ideals, but not living up to them in real life, wake up! This bit is for you!

Luke first expresses concern that some of the younger, less experienced, disciples in his congregation are getting a bit uppity with regard to their older, more experienced, teachers. Note that he is not talking about differences in age here, necessarily, but rather about experience or inexperience with living the faith. The problem here is that an inexperienced believer, who is full of enthusiasm and what my Baptist forebears called ‘the joy of the Lord’, can quickly come to the conclusion that they see all things and know all things and that their more cautious and discerning pastors are just that bit too lax when it comes to courage, faith or holiness. That was me, in my teens and twenties. A puffed-up, blustery, self-serving version of a Christian who couldn’t even see that it was so because I had a log in my eye, a log created through that fatal combination of genuine smarts and very low self-esteem that seems to afflict a great many of our young people.

Immature Christians are, very often, like Luke’s builder, who heard something of Christ’s words but screened out the bits that didn’t suit her, the bits that seemed obscure or difficult. This builder raises a splendid house near a river but is in too much of a hurry to adequately prepare the foundations. When the river rises, unsurprisingly, the house is swept away.  The immature Christian can spout the words but has neglected that crucial foundation of humility and loving action that makes it real.  As a young Christian, I could have learned a lot from those around me, those who had lived the faith ‘through many dangers, toils and snares,’ as the hymn puts it. But I was in too much of a hurry. Especially to judge my elders by standards that I wasn’t able to live up to myself.

Now I want to shift focus, somewhat, and propose that it is not only inexperienced disciples that can be quick to judge. It is also countries and nations.

We have all been shocked, his week, by the Russian invasion of Ukraine.  Putin apparently believes that Ukraine is part of an ancient Russian empire and part of the God-given domain of the Russian Orthodox Church. He has also spoken publicly about his desire to purge the Ukrainian government of what he calls its ‘evil’, 'Nazi' tendencies. Such language, and such action, shocks us. And we imagine that we are better than he is, better than the Russians, more civilized. Even more Christian.

But let me remind you of some inconvenient truths. Many of the British who invaded this country in the first half of the 19th century cited the wickedness of Aboriginal leaders and the 'God-given' or 'promised' character of this land as sufficient reason for what they did. The first Anglican bishop appointed to the colony, WG Broughton, was prominent amongst those who justified the mass killings of our people, the removal of survivors to internment camps, and the annexation of our lands, in precisely these terms.

What does it mean to be spiritually mature about these things, whether that maturity is sought as an individual or as a nation?  I put it to you that the mature person, the mature nation, is not one which believes that they are righteous, good or just, and can therefore judge their neighbours from an unassailably great height. The mature person, the mature nation, is one who knows themselves to be a sinner – mired in unrighteousness, evil, injustice – and therefore of equal standing with everyone else before the God who knows and judges us all. The mature person or nation, the mature Christian, is one who knows that not one of us has a snowball’s chance in hell apart from the mercy show us in Christ, and that all we are called to do in this world is to live in the truth, and to treat our fellow sinners with mercy.

For the other message we hear in the metaphors about trees which grow toward the heavens, with joy and peace in their woody hearts, is that it is God who causes them to grow and gives them the resources they need to do so. They do not grow on their own, from their own ingenuity or wealth or moral rectitude, as it were. Human beings are like trees. We grow because of God’s favour. We thrive because we are loved and forgiven and loved again.  So let us not condemn the Russians any more than God does. Let the power we are given move through the world by the way not of an imperial-styled mission, but of a cross-shaped ‘submission’. Let us speak the truth in love: not least about our own shortcomings! And, in prayer and action, both, let us cast ourselves and our world, entirely, upon the love and mercy of God.