Fellow Heirs Through the Gospel

We live in a world in which it is difficult to regard people of a different ethnicity than our own as human beings worthy of our love and care. We live in a world, in other words, that is racist to its very core.  Two personal stories will suffice to illustrate that contention.  In August I spent a day riding the trains and buses of Los Angeles in California, and in doing so learned two things about that city that I hadn’t known before.  The first is that the population of Los Angeles is mostly Hispanic.  That was surprising to me, because most of the LA-based TV shows and movies I’ve seen are full of Anglo-Saxons, with an occasional smattering of African-Americans.  The second thing I learned about Los Angeles is that it fosters a segregated society.  The white minority seems to confine itself to living in the hills or by the sea, and to the suited professions for work, and to cars as a mode of transport.  I think that in the whole time I spent riding the trains and buses, I saw two Anglo faces, and they were tourists from New York.  I came away with the distinct impression that despite the enormously multicultural profile of contemporary American life, the enormous prosperity of the United States is still controlled by and for one particular ethnic enclave: white Europeans.

A second story.  At lunch recently with a group of intelligent, sophisticated, Uniting Church ministers, the talk turned towards the role of Aboriginal people in our church.  Suddenly the talk became less intelligent and less sophisticated.  These people, whom I knew and respected, suddenly started to caricature, stereotype, and make fun of Aboriginal people in a way that seemed to contradict everything else they believed in.  Now, most of you know already that I am a blackfella with a white face, a native of Tasmania from long before the Dutch or the English arrived.  So the apparent fun of this turn in the conversation was far from fun for me.  Indeed, I felt deeply wounded by what was said.  So wounded that I was stunned into a tumultuous silence so confusing that I found myself unable to say anything to them about either how I was feeling or about the substance of what they were doing.  Now, you also know that I am rarely short of things to say, especially if I catch a whiff of injustice somewhere. So this was a really strange and bewildering experience for me.  It had been a very long time since I had felt that fearful, that powerless, and that small. But that is what racist taunts do to a person.  They makes you feel as though you are not a human being.  They bring home to you the tragic fact that there are people in the world who believe that you are unworthy of the respect they would normally extend to other human beings—simply because you belong, in some way, to an ethnic group that is other than their own.

So now I want to ask the ethical question “Why is racism wrong?”  The usual way of answering the question, in contemporary Australia, is that racism is wrong because human beings are equally deserving of respect and care, whatever their ethnicity.  Which I agree with.  But what if one were to then ask “but why are human beings equally deserving of respect and care”?  Now that is a question that Australians find much more difficult to answer, I suspect (not that we ask ourselves the question very much at all).  I know this because we Australians seem to so easily put our prohibition of racism aside, when it suits us—which says to me that deep down we don’t really know why racism is so very wrong.  Why did the Cronulla rioters chant racist slogans and beat each other up?  Why did the Aussie cricket fans at the Melbourne and Sydney tests make racist remarks towards the South African bowler Makhaya Ntini?  Why did our Department of Immigration deport three non-Anglo Australian citizens last year, when there was no evidence of their having committed any crime against the state?  Because, deep down, many Australians do not believe that the ethical injunction against racism is absolute.  We believe, rather, that the prohibition can be put aside when it suits us, when something more important comes along, like wanting to defeat or belittle a person or a group or a team that we perceive, for one reason or another, to be a threat.

Let me suggest to you, tonight, that there is, in point of fact, a reason why racism is wrong, why it is always wrong, and why the prohibition against racism should never be put aside for any reason whatsoever.  The reason is revealed to us in the event of the Epiphany, when Christ appeared in the world to show us that God loves and cares for everyone, without distinction, no matter what their ethnicity.  For that is the message Matthew wants to communicate in the story of the visit of the Magi to the Christ-child in Bethlehem.  He writes to a predominantly Jewish audience in one of the most multicultural areas of the Roman Empire—the province of Galilee.  Most Jews had traditionally believed that God had chosen them, exclusively, to be the recipients of his love and care, and there were apparently vestiges of  precisely this kind of theological racism in Matthew’s community.  In reading the gospel carefully, it becomes clear that Matthew’s predominantly Jewish constituency found it very difficult to accept that others—non Jews, Romans, Greeks, Cretans, Arabs—might also be welcomed by God into the divine covenant of his love, peace and justice.

What Matthew says to his community, by way of a response, it this:  ‘Who were the first to recognise the significance of the Jesus’ birth?  Who were they, who were first called by God through the rising of the star, to come and worship him?  Who were they who were first called to be God’s evangelists and prophets, those who tell the good news that Messiah is born?  Are they Jews?  Are they members of the ‘chosen people’?  Actually no.  They are Easterlings, foreigners, infidels.  What they understood, and you must learn to grasp yourselves, is that the Christ born in Bethlehem is a light not only for Israel and for the Jews, but for everyone.  What he offers us, by his teaching, his way of life, and finally by his death and resurrection, is a light to guide the feet of all people into the loving embrace of God’. 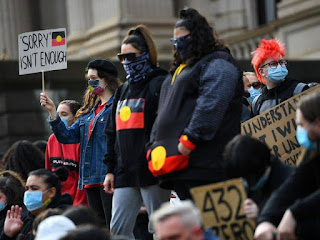 What Matthew says to his community was, of course, foreshadowed by the writer to the Ephesians.  The mystery revealed in the gospel, he says, is simply this: that Christ has come to make all people, regardless of their history or ethnicity,  fellow-heirs with the Jews, of all that God has promised.  Crucially, he adds one more thing, however.  The church, he says, is the means by which this mystery of Christ’s universal love is made known in the world, and especially to those who are most powerful, the rulers and authorities who control things.  That means that we, the church, are called not only to preach the universal love of God and to oppose racism, but also to embody this gospel in our own communal life.  Which the church, to its shame, has not always done.

And so I conclude my brief reflection with this.  Racism is wrong for one reason, and one reason only:  that in Christ we have learned that God loves and cares for all people without distinction.  Such pan-ethnic love is absolute, because it is of the very nature of God, whom the 1st letter of St. John names Love itself.  Therefore the prohibition against racism can never, under any circumstance or for any reason, be legitimately put aside.  Let us praise the God whom has made it so by the sending of his Son into the world.  And let us pray that racism shall wither way, both in our wider culture and society, but also within the dark seeding-places of our own hearts.

This homily was first published in Cross Purposes: a forum for theological dialogue 11 (2008): 3-5.

Posted by The Gazmeister at 14:27 No comments: