In the story we heard this morning from Mark’s gospel, we learn that John the Baptist was imprisoned and executed because he spoke up against the law of a powerful family in the name of the law of God.  Herod, the Roman-appointed governor of Galilee, had ‘married’ Herodias, his brother Philip’s wife, even though she was still married to Philip.  The priests and rabbis apparently tolerated this situation because they were afraid of Herod’s power.  But John did not.  Presumably he believed that officials who sat in the place of David in Israel had a special responsibility to set an example for others.  In the prophetic tradition to which John belonged, the king was also the pastor or shepherd of the people.  It was therefore intolerable that any heir of David should publicly bless and normalise any behaviour that trampled the love of both God and neighbour underfoot.  John clearly made these observations in the public arena and, having suffered imprisonment for some time, was finally executed for his trouble. 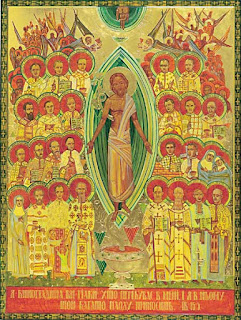 Although Stephen is properly regarded as the first Christian martyr, John the Baptist can be regarded as the prototype of Christian martyrs in that (1) his essential calling was to be a witness to the coming of the Christ, God’s anointed king; (2) he lived that calling out by loudly proclaiming the difference between the values of the messianic kingdom and the values of the socio-political reality in which he lived; and (3) he was executed for his trouble.  This is what Christian martyrs have done ever since, have they not?  Think of the famous martyrs of the ancient world, whose essential crime was a refusal to put aside the Lordship of the Christ for the sake of keeping things nice with the Empire.  Think of modern martyrs like Oscar Romero or Dietrich Bonheoffer, who did not consider themselves free to tolerate the oppressive power of Military juntas or Nazi Führers because of their Christian responsibility to love God and neighbour before even their own safety and survival.  Think of the less famous martyrs of the or of , humble pastors and church leaders who dared to confront the murderous greed of their governments in the name of God’s love for the poor.  These many lost their lives not because they were careless or suicidal, but because they felt compelled to bear witness to the faith, hope and universal love that had been revealed to them in Jesus Christ.

It is perhaps difficult for we distracted occupants of the world’s ‘most liveable city’ to imagine our way into the minds and hearts of the martyrs.  For the martyrs believe in God’s blessing so powerfully that they are willing to entrust themselves to that blessing even to the point of death.  They believe, with the writer to the Ephesians, that they are destined to received all that God has promised in Jesus, a share in that great company whose sins and failures are forgiven, a share in the inheritance that the gospels describe as the .  We, on the other hand, are so regularly unsure of God’s blessing that our faith stumbles at the first hurdle.  How can God be God, we ask ourselves, when so many of God’s people live as though God didn’t really matter?  How can God be God when the world is so full of pain and evil?

So let us examine our lives and our faith in the light of the martyrs, their lives and their deaths.  For the martyrs are simply what we are all of us called to be:  ordinary people who trust themselves, absolutely, to an extraordinary God.  Make no mistake, the martyrs do not possess anything that you and I have not already received in baptism.  They have no super-human strength to withstand the darts of the evil one.  The martyrs are tempted in every way, like us, and their biographies are often littered with many failures along the way.  Yet the martyrs, like all the baptised, experience the call to cling not to their own works of righteousness, but to God, and to proclaim this mercy from God before the cruelty of powerful men.  For them, a time came to answer that call even to the point of endangering their lives.  In such a situation, every baptised Christian is forced to choose who they really believe in.  Do I believe in myself, and in the fears and anxieties that flood my body?  Or do I believe in the God of Jesus Christ, crucified and risen that my fears and anxieties, and even my death, may not have the final word?

We are fast coming to a time when even Australian Christians – who, for generations, have taken their freedom for granted  - may also be asked these kinds of questions.  With a government like ours – which so clearly despises God’s little ones who suffer because of persecution, poverty or illness - anything is possible.  The questions are certainly asked as we approach that time when our fragile bodies are no longer able to go on, and death suddenly becomes a reality we can no longer avoid.  But the questions are also asked in the midst of our lives, at the noonday of our powers.  I hear God asking these questions of me, every time I become obsessed with my own survival or success, every time I am tempted to worship at the idols of public opinion or economic aggrandisement, every time I am tempted to spurn the needs of another in order to sure up my own future.  When God comes to ask such questions of your own life, how will you respond?  Will you respond with the faith declared at your baptism, a faith in the love and mercy of God beyond even death?  Or will you cling, ever more tenaciously, to the shadows and illusions of the propagandists who dominate our meda?  That is the question for this day and this moment.  Think on the witness of the martyrs.  How will you respond?
Posted by Anonymous at 08:02 No comments: