'The words I have spoken are spirit and life': the poetics of faith

‘Our struggle is not against flesh and blood, but against the rulers, against the authorities, against the powers of this dark world and against the spiritual forces of evil in the heavenly realms.’ What is the Apostle talking about when he utters these enigmatic words?

In part, the Apostle is seeking to make a crucial distinction between what we can see, touch, hear and taste, and what we can’t. There are things in this universe, he wants to say, which we cannot sense in any ordinary way, and yet they are real¬ - as real as this lectern, or that book, or you and I. Let me elaborate a little.  Let’s pursue the example of that book. In one sense, it is just a book. It is made of paper, of pulped wood and chemicals. Perhaps there is a little leather. Certainly, there is a lot of ink, ink which is distributed liberally on the page to create words. A book, just a book. And yet it is not just a book, is it? For there, in those pages, resides the trace and the effect of a story and an event that is far bigger and more cataclysmic in their import than any mere book could be.  The trace and effect of that God who has made our world from nothing and passed through it in cloud and fire and a people liberated from slavery; the trace and effect of Holy Wisdom becoming flesh and dwelling amongst us, full of grace and truth; the trace and effect of life bursting forth from the tombs in which we would enclose it; the trace and effect of transformation, salvation, the liberation of the world from its bondage to death and decay. The trace and effect of things far larger and more deeply complexly interwoven than mere pulp and paper, vellum and ink could ever mean on their own. What we see and touch and taste is a book. But what we feel, especially when it is read aloud, is the shaking of the earth and the remaking of the cosmos.

So when the Apostle talks about rulers, authorities, dark powers of evil who dwell in heavenly realms, he is asking us to look beyond the surface of what things might mean and listen, instead, for the resonance and timbre of a great opera that has been unfolding since before the universe was made, a cosmic drama concerning good and evil, making and unmaking, faith in the God of life and the appetite of humankind for mayhem and destruction.  Here the Apostle wants to teach us what literature scholars call a ‘hermeneutic’, a strategy for rightly reading the times and places in which we live.

Take, for example, some of the events that dominate the news. ISIL kills many thousands of people in Iraq and Syria, most of them Muslims.  The Abbot government turns back another boat of desperate asylum seekers. A young Aboriginal woman dies in police custody. The disability pension is reclassified so that thousands of recipients lose their benefits.  A pop star goes into rehab for drug abuse. What are these events all about? What do they really mean? Some - usually journalists - might read them as examples of the ongoing struggle between the weak and the strong, the ones who will form the future and those who will not.  Such readings assume, all too pragmatically, that history is written by the strong, and that it is the strong who always win.  But if we read those same events in the light of that opera an Apostle might sing, they are about faith and disbelief, flesh and spirit, light and darkness. They are about the struggle of the people of God with forces that can never be reduced to mere flesh and blood, to bodies that are either weak or strong. They are about the struggle with an ancient and cosmic evil that would seek to enlist anything and anyone to its cause, and without caring whether those enlisted understand what is at stake or not.  By reading things this way, those of us who have heard the gospel come to understand that the events that dominate our televisions or, indeed, our own lives, have a cosmic significance. They are important not simply because these events apparently determine whether we can expect a comfortable future or not. They matter because they are traces and effects of God’s eternal desire to wrest life from death, light from darkness, faith from doubt.

Let me put all this another way. The world of Buffy the Vampire Slayer, Joss Whedon’s TV show from the late 90s and early Noughties is our world. Despite the claims of the eternally prosaic and unimaginative, we do indeed live in a world populated by creatures that want to suck our blood and remove our brains and hearts. We do indeed live in a world in which the scarcity of wisdom figures and wise mentors to show us the way forces most of us to simply do our best with the limited resources we have, effectively making it up as we go along.  We also live in the world of Harry Potter, JK Rowling’s series of novels. A world in which a dark lord would seek to re-establish the rule of ‘might is right’ and there is only a small band of courageous and principled neophytes to stand against him, this time, albeit, with the help of plentiful apostle figures.  We are indeed in the midst of a battle. Not a battle against mere flesh and blood, but against powers and principalities that are so pan-dimensional that they can barely be named at all.  The Jewish and Christian traditions name such powers variously as the devil, the Evil one, the demonic, the Father of Lies, Satan, Beelzebub. But these are names which can never entirely capture or domesticate what is really at work: evil, entropy, destruction, all that would make for death and meaninglessness and nothingness.

How does one battle such a slippery enemy? What resources can the people of God draw upon? Well, the writer to the Ephesians is no more prosaic in prescribing an antidote for evil than he is in naming evil itself.  Invoking the metaphor of a warrior, the Apostle encourages the people of God to don the full armour of God, including a ‘belt of truth’, a ‘breastplate of justice’, and ‘sandals of peace’, as well as ‘shield of faith’, a ‘helmet of salvation’ and ‘the sword of the Spirit, which is the word of God’. Of course, we should never take these images literally, that is, prosaically. We should never make the mistake of thinking that the Christian is a soldier who fights the enemy as the so-called ‘coalition of the willing’ fought Saddam Hussein or the Taliban.  If we make that mistake then we have missed the point of the struggle in the same way that many mistake the point of ‘jihad’ in the Qur’an.  Christians and Muslims alike do not battle flesh and blood, strong or weak bodies, we battle evil in all its guises - whether those guises be hunger, addiction and self-loathing or systemic injustice, the culture of economic rationalism or the totalising power of the rich.  And the weapons we use are not weapons that kill, they are weapons that bring life: weapons that are really elements of a vision, a grand story, about the desire of God to transform the world into a place where truth, justice and healing are realities for everyone and everything. 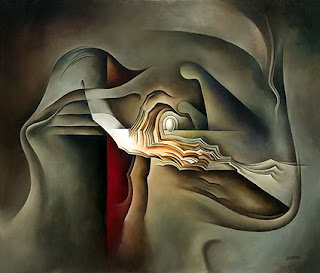 Another way to talk about all this is suggested by the passage we read from the Gospel of John, in which Jesus completes his long sermon about bread and wine with the words ‘The Spirit gives life, the flesh counts for nothing. The words I have spoken to you are spirit and they are life’.  Like the writer of Ephesians, John is here seeking to distinguish between literal or prosaic readings of the world, and those inspired by the more poetic renderings of faith.  As we have been learning in the last few weeks as we have together pondered the meaning of Jesus’ feeding of the 5000, it is a merely ‘fleshly’ reading that concludes that Jesus wants only to feed the ordinarily hungry and the ordinarily thirsty.  On the contrary, what John has been helping us to understand is that Jesus himself is the ‘bread’ and the ‘wine’ that we need. He is the heavenly bread and wine which God has sent to satiate that longing in us for a form of life that truly at peace with both God and ourselves, a form of life the gospel calls, simply, ‘eternal’ life.  This is ‘spiritual’ reading of the events the gospel describes, a rendering of the feeding by the sea of Tiberius that in very real ways gave birth in the church to our celebration of the Eucharist.  Because of the ‘spiritual’ poetics of John, which he contrasts with more ‘fleshly’ readings, we have come to see that the bread and wine we share at the Supper is far more than bread and wine.  Together, the bread and wine are the Word make flesh, Jesus himself, who by our eating and drinking takes up residence not only in our bodies, but also in our minds and hearts.  By eating and drinking in this manner, with the eyes of faith wide open, John teaches us to learn a new way of reading the world and to take this poetics to ourselves as the only language that is able to give us life.  ‘Learn of Jesus in prayer’, says John. ‘Approach the table in prayer and see there the word of God made flesh in Jesus, who is able to inhabit your life by faith and give you hope and a future, despite what the cynics, the politicians and the journalists might say. Learn of Jesus in the operatic ritual of the Eucharist and learn to give thanks for God’s victory over all that would make for death, for darkness, for injustice or despair.’

I close with a prayer by Leonard Cohen, a Jew who knows the poetics of the Christian faith better than many Christians that I know. Here he throws himself upon the mercy of God, as we all must if we are to find our way through the sufferings of this life to the life of resurrection that Christ promises.

This homily was first preached at Monash Uniting Church in August 2015.
Posted by The Gazmeister at 14:31 No comments: