At forty-seven years old I am no longer young. The 'warrior phase' is well and truly behind me. The future stretches out far more bleakly (or should it be 'really'?) before me.

For several years now, a great many changes of mind and heart have been insinuating their way into my imagination. Perhaps I should come clean and confess that I no longer see or hear or feel as I once did about a great many things. Some of you who knew me best when I was a twenty-something or thirty-something may be surprised at what you read here. Others, the wisest amongst you, will have seen what was coming from a very long way off.

1.
When I was young, I dreamed of writing a revolutionary book of theology or philosophy that would fundamentally change its reader's hearts and minds. Now I know that I will never write such a book. Or, if I were by some miracle to produce such a tome, I know it would sink like a stone into obscurity because the practice of reading such books is almost gone.

2.
When I was young, I dreamed that youthful enthusiasm and imagination would fundamentally change the political landscape so that a new era of peace with justice could emerge. Now I know that the powers of greed and entropy are far more entrenched than I could have imagined. I also know that the vast majority of young people have been recruited by those very powers, whether they are aware of the fact or not.

3.
When I was young, I thought that the world was my oyster and that I would die a prosperous and comfortable man. The key to my future, I surmised, was education. Education would lift me from the poverty in which I had grown up, and release me into a prosperous future in which I could do whatever I wanted to do and be whatever I wanted to be (to paraphrase the Master's Apprentices). Now I can see that I unconsciously pursued the kind of education that would render me rich in words and ideas and values but poor in things. 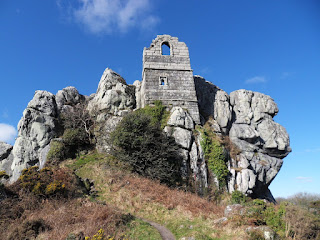 4.
When I was young, I imagined that I would remain healthily capable, competent and energetic well into my seventies. Now I know that growing older means coming to terms with the fading of one's powers. Now I know that ill-health can shatter one's dreams and bring them to naught.

5.
When I was young I imagined that serving Christ was a glorious thing, a praiseworthy thing, a making of oneself into a powerful centre of moral authority that would draw whole communities into its thrall. Now I understand that following Christ is about being despised, rejected and rendered anonymous. It is about becoming an object of scorn for both monster and moralist alike. It is about losing oneself entirely.

All of which is to say that, for me, the world is not at all as I imagined it would be when I was young. I am no longer the 'promising young leader' that some described two decades ago. I am a person whose hopes and dreams lie in ruins under a towering rubble of self-deception, ill health, and Christian realism.

I should be glad of another death

. . .  were we led all that way for
Birth or Death?  There was a Birth, certainly,
We had evidence and no doubt.  I had seen birth and death,
But had thought they were different; this Birth was
Hard and bitter agony for us, like Death, our death.
We returned to our places, these Kingdoms,
But no longer at ease here, in the old dispensation,
With an alien people clutching their gods.
I should be glad of another death.
from T.S. Eliot, ‘The journey of the Magi’ (1927)

I have seen something.  Something which is difficult to recall with accuracy, and almost impossible to speak about.  Something wonderful, and terrifying, and intoxicating, and utterly strange.  What I have seen, I saw not with my eyes, nor even with my soul (whatever that is).  It was, rather, a feeling that I had, myself, been seen by another.  Seen transparently and utterly, as under a field of ultra-violet light, so that nothing of who I am or will become now remains hidden.  Seen in such a way as to transform my entire sense of who is the observer and who the observed.  So that the whole manner of my observation¬, whether of self or society, has been irrevocably changed.  What I see now is no longer what I saw before, even though I’m looking out on the same scenes, the same people.  It’s as if my seeing is charged, now, with the consciousness of that other, so that my seeing is always already what this other sees as well.  It was not so before I saw.

When the Magi set out on their journey, it was because they, too, saw something.  But what they saw is also difficult to name.  When Matthew says that it was a star that they saw, the star clearly evokes a peculiar and particular fact:  the birth of a king for the Jews.  The star rises in the east, a permanent sign and symbol for the rising of new hopes and expectations for the downtrodden people of Judea, hopes that are coming to birth in the babe of Bethlehem.  That is what Matthew, I think, intends to say about the meaning of the star.  And yet there is a logic in his story which works against all that.  For it is not the babe’s own people who see the star, or recognise it’s significance.  It is not Herod, the king of the Jews, or his counselors who journey to pay homage to the newly born Messiah.  Rather, it is Magi from the East who accomplish all this.  Gentiles.  Natives of a foreign land.  Infidels.  So what did they see?  What did they see that could possibly move them to become interested in the significance of a minor principality, a tiny outpost of the great Roman Empire?  What moved them to leave where they were, to say goodbye to all that was solid and familiar, to put aside responsibilities and livelihoods?  What moved them to put relationships on hold, to put plans on hold, to change direction altogether and journey into a difficult and dangerous land?  What could they possibly have seen to make things so?

When one considers the state of things, it is indeed difficult, I think, to believe that joy is possible.  Most of the world’s people live in poverty.  And they live in poverty because of the excessive greed of the rest of the world, the greed of those of us who belong to the so-called ‘developed economies’.  Because the economic elites require endless consumer choice at the lowest possible price, the poor are condemned to short lives of hard labour and ill health.  And this is not simply a 1st World/ 3rd World phenomenon either.  Even within the 1st World economies, there are those who must work themselves to death so that the elites may continue to enjoy their consumer freedom.  That is why we have sweat-shops.  That is why the large franchises employ ‘casual’ work forces (=low wages, few rights).  That is why we have a huge ‘informal’ work force which receives almost nothing in return for its economic contribution.

And here is the most joyless bit of all.  Whether you are rich or poor, a hard worker or a hard drinker, whether you’re the CEO of Telstra or a technician who’s just been made ‘redundant’, our joy is being stolen away by advertising.  Because advertising wants to sell us something, something we don’t really need.  And when we get that something, whether by the divine right of the rich or by sheer hard work and ingenuity, we know straight away that we didn’t really need it at all.  Because we still feel empty.  Beneath the shiny happy exterior we put on for our friends, beneath the happy-go-lucky persona of the working-classes or the cool and confident aire of the middle-to-rich, we are still empty.  The pages of New Idea and Cosmopolitan are full of people who still haven’t found what they’re looking for.

In T.S. Eliot’s extraordinary poem, he imagines himself to be one of the Magi turning up at the birth of Jesus.  The journey has been hard, and long, in a thoroughly twentieth-century way.  Its been too hot and too cold, and the transport has not been at all comfortable.  Not like home.  Their porters and servants were only interested in booze and women, and each town seemed either too expensive or too hostile or too alien.  And, of course, the stumbling attempt to walk against the grain of all that is consumable and fashionable seemed, for much of the time, to be nothing but sheer foolishness.  But when they arrived, when they actually found that which came to find, they were utterly and completely unprepared.  For while they were witnesses to a birth, a birth much like all the other births they have ever seen, this was a birth which induced a kind of death in all touched by its power.  So much so, that when the Magi returned to their own lands and their own lives, they found that their old obsessions, their old desires and plans have disappeared.  That the people and pastimes they had once admired seemed now to possess no more substance than that of shadows, clutching at worthless gods.

When people of faith see something, or rather, when they become aware of a gracious presence whose vision suffuses and possesses their own, the world is utterly changed.  Black and white suddenly appears colourful.  The hopeless situation becomes pregnant with possibility.  The brick wall which impedes all progress becomes an opportunity to learn rock-climbing.  Not, I must stress, in psychologically disturbed ways, which seek to deny and sublimate the very real pain and darkness of life.  No.  The new way of seeing is about depth and complexity.  And about double-vision.  While acknowledging the painful realities, the changed vision I’ve been describing does not allow those realities to become totalized, to take over the world and rule there without rival.  The vision granted by faith is about discerning, even in the midst of the very worst that life can dish out, the real but hidden properties of light, hope, love, joy.  Seeing those things which are ordinarily hidden, naming them, and so bringing them into the light.

According to Eliot, the Magi suffered a death in order to become mystics, mystics who could see that the birth of a provincial messiah was also the possibility of their own rebirth in the cosmic plan of God.  So too, I would encourage all gathered here this morning to continue on that same journey.  The journey where despair and darkness is refused its ultimate power.  Where the advertisers are exposed as charlatans.  Where the all-pervasive wrongs of the world are no longer allowed to be all-pervasive.  Where the seemingly pointless birth of a provincial king in the ancient world of Rome is no longer regarded as pointless.  Where love and joy and peace are discerned and named and allowed to flourish.  And that which seemed impossible becomes a possibility once more.

This homily was first preached at South Yarra Baptist Church on the Feast of the Epiphany 2003.
Posted by The Gazmeister at 09:27 No comments: