The Works of the Father

On the album ‘Everyone is Here’ by the New Zealand singer/songwriters, Tim and Neil Finn, there is a song that opens with this line:


We’re all God’s children
And God is a woman
But we still don’t know who the Father is.

It’s a terrific song, because it refuses to see the usual new-age theology as, in any way, an adequate basis for peace among nations.  If we’re all God’s children, and God is that feminist ideal who is supposed to be into cooperation and listening (instead of competition and fighting), then how is it that the world stands, yet again, on the brink of several human-made disasters?  ‘If this is God, and we are God’s children,’ ask the brothers Finn, ‘shouldn’t we be getting along famously?’  How is it that the children of a justice-loving God stand by and watch as 200 000 people are massacred in the Sudan?  How is it that the children of a mercy-loving God seem content to let millions of children die of AIDS and malnutrition in Africa and Asia?  How is it that the children of a fairness-loving God can be so greedy and possessive towards the labour and resources of other people?  The answer the Finns hint at is not so much an answer, but a question:  perhaps all this happens because we still don’t understand who God is as Father?  It is the question that I should like to address this morning.

There has been an understandable nervousness about the Fatherhood of God in recent theology, and on two grounds.  Some theologians have been nervous about God’s Fatherhood because of the experience they had with their own Fathers.  These theologians, like a great many people in the community at large, experienced their Fathers as, as best, distant bread-winners who had little time for emotional intimacy with their children and, at worst, stern or troubled abusers of their children.  If Fathers are like that, these theologians argued, then Fatherhood is no longer an appropriate metaphor for God.  For God is more like a Mother:  intimate, caring, protective.  Another group of theologians, some who had experienced the fascist-styled ‘fatherhood’ of Mussolini and Hitler, worried that the Fatherhood of God encouraged people to remain stuck in an infantile state, never maturing to a point where they could assume moral responsibility for themselves.  These theologians spent considerable time wondering why the citizens and soldiers of war-time Germany and Italy accepted all that they did from their national ‘Fathers’.  Their answer was this:  that many of us would rather not grow up; we would rather believe that someone else, a strong father-figure for example, is always right and knows, unfailingly, what is best for us.  By believing that, they argued, we stay in a perpetual state of infancy.  We never grow up.  In the wake of Hitler and Mussolini, these theologians concluded, it is no longer useful to refer to God as Father.  Fathers like these do not let their children grow up into ethical and moral agency, the result of which is Auschwitz and the SS.

Now, much of what these theologians say is absolutely true in terms of its analysis of culture and human psychology.  Who can doubt that if your father has been emotionally distant, that you are likely to believe that God the Father is a distant and unapproachable figure as well?  Who can doubt that if you were abused by your father in some way, that you are likely to have enormous difficulty trusting God as Father?  Furthermore, who can doubt Freud when he says that for many of us, God the Father is nothing more than a dictator, a despot, who protects us from growing up to take moral responsibility for our actions?  Certainly not me.  All this is true. 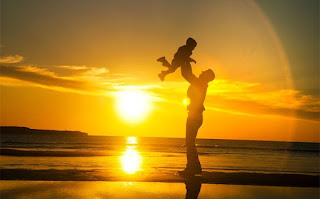 But here is my objection, and the objection of a great many others as it turns out:  that this nervous theology about God the Father has been too much interested in human sin, and not enough interested in the redeeming God of Jesus Christ.  In other words, theologians who are nervous about the Fatherhood of God too often allow their experience of human sin to overwhelm the experience of God as a loving redeemer that belongs to the primary witnesses of faith in the New Testament.  For if we actually turn to the New Testament, for a moment, we discover this:  that God the Father is neither a despot, nor a distant bread-winner, nor is he an abuser of his children.  God the Father, we are told, is like his Son, Jesus:  a friend, a lover, a companion in difficult times.

Consider the following words of Jesus from John’s Gospel:


I am the way, the truth and the life, no-one comes to the Father except through me.  If you know me, you will know my Father also . . .  Whoever has seen me, has seen the Father . . .  I am in the Father and the Father is in me.  The words that I say to you I do not speak on my own; but the Father who dwells in me does his works . . .  Very truly I tell you, the one who believes in me will also do the works that I do and, in fact, will do greater works than these, because I am going to the Father.

Here we learn a number of increasingly scarce lessons about God as Father.  First, and most importantly, the Christian God is seen and known not through the lens of personal psychology or philosophical speculation, but through a patient examination of the life and teaching of Jesus.  God the Father, we are told, is at work in the world through the agency of his Son.  Whatever we seen the Son doing, whatever we hear the Son saying, that is what the Father is doing and saying as well.  Over the years I’ve heard many people say:  ‘I can’t relate to God the Father; he is too mysterious and distant.  Jesus I can handle, though.  Jesus is more concrete and real.’  Well, to all who think like that, here’s the good news.  The Son, Jesus, is like his Father.  The Father is everything that you see in the Son.  He is love in all its simplicity and complexity: intimate, passionate, striving, forgiving.

A second lesson follows on from this.  God the Father is not away somewhere else doing his work.  His work is in our midst, here, in amongst all the chaos and confusion of our lives as they are really lived.  It is important to remember what Jesus’ favourite name for God is ‘Abba, daddy.’  In Aramaic, the term denotes an emotional intimacy, an experience and trust in the emotional engagement of the Father in all that the child is struggling with.  What we learn from Jesus is this:  that God the Father is our Father precisely in his willingness to be around, to be available to us, to care.  That is what fatherhood means, for the gospel:  being there, being available, passionately engaged in the struggles of relationship.  Not in a way that is despotic or manipulative.  On the contrary, as Jesus says in this same discourse, we are no longer God’s slaves, but his friends—people who are invited to take responsibility for our own side of the relationship, to respond to all that God is doing as adults and moral agents.

A final lesson is this.  Because God the Father is close by us in Jesus, living his life and purpose out in the midst of our own lives and purposes, the call of God is very clear and cannot be easily ignored.  God’s will for the world is no longer a mystery, hidden in secrecy.  The secret is well and truly out.  What the Father calls us to be and do is exactly what Jesus was called to be and do:  to speak the word of his Father and do his works, to be God’s representatives in the world—not because we have to, not because we are infants, but because we trust God, and want to join with Christ in transforming the world about us.  So, if you want to know what God is doing in the world, take a look at Jesus.  And if you want to join God in that work, if you want to change the world, become an imitator of Jesus.  As Jesus imitates his Father, so we are called to imitate Christ.  If we do, then the world will change,  it will become more like God, the Father of Jesus Christ, and less like the distant, corrupt or despotic fathers our nervous theologians are so worried about.

So, given that the modern church is perpetually wondering what to do with itself, what does all this theology mean?  Simply this:  that we will never know what to do with ourselves and our church unless all of us, and not just the clergy and a few others, give ourselves over to a profound and ongoing meditation upon the life and teaching of Jesus as we have it in Scripture.  Every revolution begins with its manifesto, and the manifesto of Christians is the New Testament.  I encourage you to read it, to study it, and to trust it.  For in trusting the New Testament, you trust Christ.  And in trusting Christ, you trust God, God who is our Father as well as our Mother, God who wants the world to be transformed in love.

In the name of God—Father, Son and Holy Spirit—as in the beginning, so now and forever, world without end.  Amen.

This sermon was first preached on the Fifth Sunday of Easter, 2005, at St Luke's Uniting Church in Mount Waverley.

Posted by The Gazmeister at 11:00 No comments: