Not the Messiah, People!

Well, greetings everyone. Thanks for having me back. It’s an unusual thing, people having me back to preach more than once. It’s possible, of course, that you may have forgotten just how excruciating my preaching can be.  If that’s the case, don’t worry. I’m here to remind you!

You laugh, but I’m only partly joking. My homily will, I promise, be an immense non-event for many of you. For what do folks reasonably expect from a preacher when they get along to church?  Words of wisdom for a topsy-turvy age? Sorry, if I ever knew how to dance wisdom’s tune, I’ve now forgotten the steps. Words of comfort for a hurting world? Nope, fresh out of those too. I have no idea what to do with my own hurt, let alone anyone else’s. Practical solutions for practical problems? Nuh, I’m famous for my lack of practical know-how.  One reviewer of my most recent book said: ‘Dr Deverell is very good at lamenting the problem, but offers very little by way of practical solutions.’ So, here we are. Two paragraphs in and things are looking pretty grim already.

Still, I have one competent-preacher trick to keep your attention. Name-dropping. When Nathan and I were discussing my visit during the week . . .   Sorry, just messing with you. I really meant to drop the name of that other famous Baptist. John. John the Baptist.  I have great affection for John, even though I’m an Anglican. Why? Because he, too, was a lamentable preacher.

According to the account we have from the other John, John the Evangelist, when some faculty members were sent from the Jerusalem theological college to ask who John was, he replied ‘I’m not the messiah’.  I’m Not The Messiah. Which is another way of saying, ‘Nuh, not wise. Struggling to see a big picture in all of this. Nuh, not a healer of hurts.  Not a doctor or psychologist, people. Nuh, no practical solutions to our social and political problems. Not a canny politician.’ Nope. Not the Messiah. Not the bloke with the answers. No-one’s saviour. Not me. Nuh.

Now, it is extraordinary to me that the Jerusalem theologians didn’t leave it at that and walk away. I mean, John had told them clearly that he was nobody special and that there was nothing to see here. But hey! They’re theologians! Not particularly bright! So they asked him two more questions about his identity: ‘Are you Elijah?’, ‘Are you the prophet?’ Remember, people, that these were crazy times. The Romans had occupied the countryside and folk were desperate for a saviour.  So people speculated about the coming of a messiah, a saviour anointed by God, who would rescue God’s people from their oppressors. There were rumours that a prophet, a great preacher, would arise to announce the messiah’s imminent arrival, and it was possible that this preacher would be Elijah, one of the greatest, returned from the dead. Perhaps John was that prophet? Perhaps John was Elijah?

Well, ‘No. I am not.’ That was John’s categorical reply. And I don’t think he was lying. Because liars, in my experience, tend to present themselves as saviours. Like Trump telling his supporters, in 2016, that he would ‘drain’ the Washington ‘swamp’ of its political corruption when his real plan was to corrupt it even more. Or Peter Dutton promising, this week, to save us from terrorists by granting himself the power to detain people without judicial review, when his actual plan is to discourage dissent by creating a legal apparatus to gag journalists and whistle-blowers. John the Baptist wasn’t like the Donald. Neither was he like Dutton. He didn’t lie by presenting himself as a saviour.  Instead, he was up-front and disarmingly truthful: ‘I am not Elijah, I am not the prophet, I am not the messiah.’ (Sings ‘It ain’t me babe, no no no, it ain’t me babe, it ain’t me you’re looking for babe’). Sorry, I digress.

Apparently John’s going all Bob Dylan just made the theologians even more curious. ‘Ok then,' they said. 'If you’re not Elijah, not the prophet, not the messiah, who are you? Give us an answer for those who sent us. For you wash people's sins away in the river, which looks like the kind of thing the prophet who announces the messiah would do.’ To which John memorably replied, and I quote:

I am the voice of one crying out in the wilderness, 'Make straight the way of the Lord,' as the prophet Isaiah said . . . I baptize with water. Among you stands one whom you do not know, the one who is coming after me; I am not worthy to untie the thong of his sandal.

Ooh. Now this is getting interesting. ‘I am a voice crying out in the wilderness’.  What does that mean? Can’t claim to know precisely, but that ‘voice’ reminds me of a couple of phrases in the 2017s ‘Statement from the Heart’, promulgated by a broad coalition of Aboriginal and Torres Strait Islander leaders. Amongst other things, the Statement calls for the ‘establishment of a First Nations Voice’ to be ‘enshrined in the Constitution.’ This ‘Voice’, the statement goes on to say, would be there to ensure that in our relationships with settler communities are built upon truth rather than lies. Truth. Truth about what has happened in this land. The invasions, the stealing of lands, the massacres, the removal of children from their parents, the exiling of elders, the slavery, the stolen wages, the destruction of language and culture. The truth. A voice to ensure that the truth is told. A voice crying in the wilderness. The wilderness of lies and denial. The wilderness of Australia today. 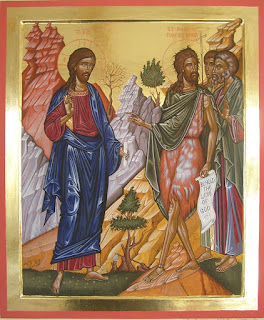 Perhaps the voice of John the Baptist is like the voice proposed by the Statement from the Heart, which makes no promises about a saviour but, more modestly, expresses a hope that the truth will be told; that someone, anyone, will become a voice of truth. For whilst lies and denials cover everything in darkness, truth uncovers things, reveals things, bathes them in light. Remember what the evangelist says of John at the beginning of his gospel?

John’s baptism was meant to be a testimony to the light, to the truth. It had to do with repentance, a washing away of all the shitty lies we tell ourselves. Especially the lie that we ourselves are the light, the source of our own salvation, or that a charismatic man of passion like John is the light, or that your favourite church or preacher is the light.  Newsflash people. John was no saviour! He bore witness to the saviour. He pointed away from himself toward the saviour. For the light was the messiah who was yet to come. It was Jesus, who came and lived amongst us, who taught us his ways, who was murdered by the state and exulted to the right hand of God. Who will come again in glory to judge the living and the dead and whose reign of justice and peace will have no end. It is he who is the true speaker of the words Isaiah records:

The spirit of the Lord GOD is upon me,
because the LORD has anointed me;
he has sent me to bring good news to the oppressed,
to bind up the brokenhearted,
to proclaim liberty to the captives,
and release to the prisoners;
to proclaim the year of the Lord's favour,
and the day of vengeance of our God;
to comfort all who mourn;
to provide for those who mourn in Zion—
to give them a garland instead of ashes,
the oil of gladness instead of mourning,
the mantle of praise instead of a faint spirit.

One of the church’s most terrible mistakes was to take this passage to itself, as though it were we, the church, who take on the mantle of the messiah. We do not, not even as the ‘body’ or ‘temple’ of Christ in whom Jesus’ Spirit has come to dwell.  For the best way to ‘be’ the body of Christ is, somewhat paradoxically, to point away from ourselves to the Jesus who is not yet here, to the mystical, cosmic, body that has not yet entirely arrived. To be like John the Baptist. To tell the truth that we are nothing special, that our answers to the great questions are at best educated guesses, and that our ‘good deeds’ are worth little more than the thong of Jesus' sandal, so regularly do they fall short of the mark. But then we are called to look toward the horizon, toward the light that is coming into the world entirely of its own accord. And to encourage others to do the same, to follow our gaze, and to wait with eager expectation for the one who, alone, has the power to do some decent saving.

All of which is to say: If you’re looking for wisdom, look for it in Jesus. If you are hurting and in need of healing, look for the salve that is Jesus. If you need practical solutions to difficult problems, look for them in Jesus. Because your preachers and the churches that ordain them, we aren't really up to it. We can't be relied upon to know what we are doing. The most honest of us know that it is so, and cast ourselves upon the grace of God as our only chance for redemption. But some of us are also canny enough to point to Jesus, the first and only source of all such grace. Like a beggar telling other beggars where to find bread when you have none of our own. As every Baptist worthy of that name should.

This homily was preached at South Yarra Community Baptist Church on the 3rd Sunday of Advent 2020.