A voice cries out

Let me begin with a story, a might of been, with regard to that voice crying out in the Judean desert. Down amongst the ruins that used to be Jerusalem, a voice cried out:

In the wilderness prepare the way of the Lord.
Make straight in the desert a highway for our God . . .
Then the glory of the Lord shall be revealed,
and all people shall see it together,
for the mouth of the Lord has spoken.

The voice drifted on the morning breeze to where Joseph and Baruch were cooking their breakfast on a nearby hill.  ‘What highway’s he on about?’ said Joseph to Baruch.  ‘The highway of the Lord’, said the other.  ‘Apparently God is going to restore our fortunes.  He’s going to come roaring down this new highway they’re making, rebuild the city, and set up court in the temple as if he were Moses himself!’   ‘Somehow I doubt it!’, said Joseph, and their laughter pealed across the valley.

But after the silence had taken hold once more, Baruch said:  ‘Still, that’d be nice, wouldn’t it.  A king in who’d give blokes like you and me a go.  I’m blowed if I’m going to slave my guts out to keep these new bloody nobles in their palaces!’

Joseph chewed his tripe thoughtfully.  ‘Time for a year of . . .  ah, what did they call it?  . . .  Jubilee, that’s it.  Time for Jubilee, when all that’s been lost or screwed up get put back to rights.  You know, it was the grandsires of these new bloody nobles that confiscated our clan-land back in the time of Uzziah’.  And then his eyes filled with tears.  ‘I’d swear my troth to a Jubilee King.  Bloody oath I would.  Bloody oath’.  The cry of an eagle lifted their eyes to the sun, while, in the valley below, a shepherd led his sheep through the ruins. 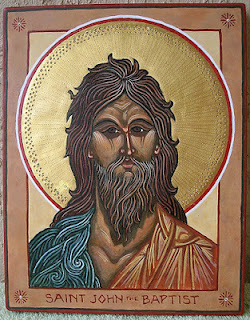 ‘So who is this Baptist fellow, anyway?’ asked Simon.  ‘A hermit’, said Uriah.  ‘He comes from a good family, by all accounts.  His father was a temple bureaucrat and he was being groomed for the priesthood.  But right in the middle of his training he had a bit of a turn and bolted for the desert!  Apparently he spent some time with that monkish crowd out near the dead sea.  What are they called?’   ‘The Essenes’, answered Simon.  ‘Yeah.  They’re pretty strange, by all accounts, waiting for their beloved Messiah to come!  My uncle Max (you know, the psychiatrist who trained in Rome) reckons that these separatist groups don’t have the ego-strength to mix it in the real world.  So they run away to the desert, where they can set up their own little fantasy.  Makes life simpler, I’m sure.  But it’s such a cop-out.  They could never cope with the real world that you and I know about, that’s pretty clear!’.

Uriah took a drag on his cigar and ordered another caráf of red.  ‘I went out for a look the other day’, he said, casually.  Simon nearly choked on his café-latté.  ‘You went out for a look?  My God, man, what possessed you to do something like that?  Surely you’re not having a mid-life crisis!  Not at the tender age of 35!’.  His laughter filled the restaurant, but Uriah didn’t join in.  Flushing, he stared into his drink.  Simon stopped laughing.  ‘I’m not sure why I went, exactly’, said Uriah, looking up and out, as if towards an empty sky.  Then he turned to look his companion in the eye.  ‘Listen, Simon.  This is going to sound weird, but . . .  I’m feeling a little jaded right now.  This ‘real world’ we live in, you and I, isn’t feeling like much fun at the moment.  What’s real about being part of the middle-class?  Most Jews live in landless poverty!  What’s real about doing legal work for the Romans? They’re the occupying power, for Moses’ sake!  I feel like I’m betraying my own people, stomping on their heads just to get a leg up!  Add to that the fact of my disaster of a marriage!  I work so hard that I hardly ever see my kids, and I really don’t know who Priscilla is these days, or what she gets up to  . . .’

Simon’s face has turned pale.  ‘Mate’ he said. ‘I can’t believe what I’m hearing.  Listen, life might not be all it’s cracked up to be at times.  But this is how it is!  This is reality!  This is reál-politics!  God Almighty!  What did that preacher say out there anyway?’

Suddenly the space around the two men was different.  Something shifted, the world changed.  Even the sunset and the evening breeze seemed to speak in a different voice.  For a moment, Simon was caught there.  From a place deep in his people’s history he heard the mad voices of nomads, prophets and saints, crying out with anguish and longing for a world made new.  And for a moment, just a moment, he joined them in their longing.  But he shook himself free from the reverie, and rose from the table.  ‘Uriah’, he said, ‘you’re losing it mate’.  And away he walked.  Back to the real world.  The world of cafés and credit and weekends at the beach-house.

When you come to worship, why do you come?  Is it to escape from the real world, to run away from the awfulness of life?  Or is it the opposite.  Did you come, perchance, to enter, albeit for a moment, a world which is somehow more real, a world that takes your reality seriously, and addresses you where you are afraid, and hurting, and in need of healing?

If this Advent season is about anything it’s about taking the voices that cry in the wilderness seriously, the mad voices of nomads, Indigenes and saints, the voices that tell the truth.  And what is the truth?  Simply this: that the “real” world is a fake; that capitalism and the mad rush to accumulate and consume is killing us all, body, mind, and spirit; that entertainment and celebrity are stealing away our capacity to lives our own lives.  Ha!   I remember a schizophrenic friend being afraid to turn on the television.  “When I do,” he said, “the demons suck my spirit away.”  I thought he was dangerously unstable at the time.  But now I’m not so sure.  Now I reckon he was on to something.

The voice that cries in the wilderness tells another truth too.  “Things can be different,” it says, “Thing can be different than they are today.  Why?  Because the glory of God is coming!  It is on its way, and it is nearly here.”  You see, what John the Baptist promised people out there in the desert was not just change, but metamorphosis.  What’s the difference, I hear you ask?  Well, let me put it like this.  Change is when you swap from Pears shampoo to Decoré.  Change is when you sell up in Balwyn and move to Springvale.  Change is watching “Sixty Minutes” instead of “Today Tonight”.  But metamorphosis?  Metamorphosis is when a Tootsie family in is able to invite their son’s Hutu killers to dinner.  Metamorphosis is when Senator Macarius of becomes a hermit monk, and plaits ropes for a living in the Egyptian desert.  Metamorphosis was when my Dad stopped beating people up because he found somebody who could truly love him.  My mum.

To be metamorphosed.  In the Greek of the gospel the word is metanoia, and it is expressed and performed in the practise of baptism.  In the early days of the faith, when the church was possibly more Christian than it is today, baptism was taken very, very seriously indeed.  For baptism was not just a ceremony of change designed to welcome people into a church they can neither comprehend nor belong to.  Rather, it was a powerful sacrament of metamorphosis, a piece of method theatre in which the candidate bound themselves so intimately to Christ that everything they had been before they heard his call was literally cast aside in order to make room for the new life which Christ had promised them by his love and his grace.  In approaching the waters, the candidate would remove their clothes.  Then they would descend, naked, into the waters, where the priest would pronounce the sacred words.  Then, when they emerged, the choirs would sing and they would put on the new garb of white, which symbolised the glory of Christ.  No longer would they live from their own powers.  From now on, they were dead, marked with the scars of the crucified Christ.  The life they now lived in the body would be that of the Son of God, who loved them, and gave his life for them.  Here there was no gap between ceremony and life.  Life became baptism, and baptism became the life in Christ.

In baptism we pledge ourselves to Christ, to become his slaves, to give ourselves into his hands completely.  But in doing so we in respond to a love and promise that always already precedes our decisions:   Christ’s promise to always be there, on the other side of the waters, there to raise us from the depths, and array us in the splendour of the redeemed.  The promise assures us that our time of penance is ended, that it is God, himself, to now comes to work the forgiveness, freedom and deliverance we so long for.   Without this promise, all of our being sorry and all of our determination to change makes for nothing.

Glory be to God—Father, Son and Holy Spirit—as in the beginning, so now and for ever, world without end.  Amen.