What God Hopes For

Today I want to talk to you about hope. Not the hopes of humans beings, or even of Christians in particular, but the hopes of God. God’s own hopes are expressed rather well by the apostle Paul, I think:


. . . the creation was subjected to futility, not by its own will, but by the will of the one who subjected it, in HOPE that the creation itself will be set free from its bondage to decay and will obtain the freedom of the glory of the children of God . . . Now hope that is seen is not hope. For who hopes for what is seen? But if we hope for what we do not see, we wait for it with patience.

According to Paul, God made the kind of world we have – a world filled with futility and decay – in the hope that the creation itself might one day transcend all of that and embrace what he calls ‘the freedom of the glory of the children of God’ - by which he means that we might all come to share in the joy of God’s life and being in the way that Jesus did. For Paul, you see, Jesus was the first of many children, a human being who submitted himself absolutely to the sadness and despair of the world in order to show that there was a way through to something far better, namely a joyful reconciliation with our creator. In that sense, Jesus is our trail-blazer. God hopes that all of us will embrace the choices Jesus embraced, so trusting his vision and his Father’s care, that we might also come to share in his inheritance as the divine Son of God. God hopes that we might all become divine children like Jesus or, to put it another way, God made us caterpillars in the hope that we might one day become sick of looking at the ground, and so cleave to Christ as he passes from death to life, that we should become butterflies instead. 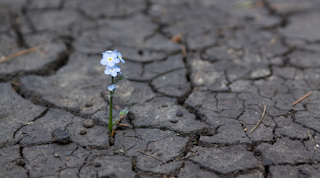 But note this, friends, that hoping for something is not the same as seeing it happen. In fact, it is quite the opposite. We hope for things precisely because those things are not entirely present to our experience right now. And so hope is always accompanied by a kind of affliction, the affliction of longing for something that has not entirely arrived. Hope then, can be rather tortuous. The contrast between where we are and where we would like to be can be so painful that we cry out with frustration, longing, and anger. Some see Christians who are not content with the present reality as pessimists, ‘glass half empty’ people. But nothing could be further from the truth because, it is only those who have a clear vision and hope for that which has not yet arrived who have a legitimate basis for critiquing what already is, the ‘status quo’ if you like. Of course, the contrast between hope and reality is very difficult to bear sometimes. There is a constant temptation for God’s people to abandon their engagement with hope in order to escape the pain of that contrast. But Paul says that it is not only ourselves but the whole creation which cries out in the pains of labour, longing for the freedom of the children of God to be revealed. In another place he talks of being in the pangs of labour that Christ might be born in the hearts of his people. And so I have come to see that all who suffer because of their commitment to hope bear in their body the scars of the Christ who has gone before us, the Christ who endured the cross in order to bear witness to his vision of a world renewed in love, peace, and justice for all. Thus, it is only those with hope for a new world who really care about the world as it already is.

In that connection, consider this other implication of Christ’s suffering: that it is not only ourselves who hope but do not see, it is not only we human beings who cry out with longing for a reality not yet present. First and foremost it is God. For Christ is God incarnate. In Christ, God longs more deeply than any of us. Thus, it is the longing of God, revealed in Christ Jesus, that actually provides the foundation and impetus for human hope. In the context of this longing, the cross of Christ is not simply a dying for the sins of the world. It is also the sign of God’s willingness to be immersed in the futility of things as they now are. It is the sign that God is with us in longing for a better world. It is the sign of God’s passionate love for all who suffer because the world is not yet what it may be. It is the sign of Immanuel: God with us, in our present, for the sake of a promised future that will renew the world in peace, love and justice.

To all who are chosen by God to share in this longing, the dream of Jacob at Bethel becomes a treasured source of inspiration. For here is one of the most radiant fruits of faithful prayer: a vision in which ordinary things are transformed into extraordinary things. Where places apparently empty of God become places where the angels ascend and descend in a never-ending dance; where stones and grass and sky become the courts of divine presence; where wind and water become the whispering of God’s promise. I remember praying in the bush once, in a place now called Fortescue Bay in South-east Tasmania. At the time I was particularly conscious that the Aboriginal traditions which had once inhabited that part of Tasmania were no longer alive. Colonisation had all but wiped them out, so that there are now very few of us who can recall their significance. But while I prayed, while I lamented the fact, the bush seemed to come alive with presence. I could hear the crackle of campfires, and the songs of children, and the splash of women diving for abalone. It was like a message from God which said ,‘the Spirit of life has not finished hoping for your dead people and their traditions: there will yet be a resurrection in which all that has been lost will be recovered’. In the dream of Jacob, and in many other dreams, God encounters all who are lost and lamenting, and offers them the chance to find themselves anew by becoming emissaries of blessing for all the world – carriers, like the seed of Jacob, Israel, of promise and of hope not only for themselves, but for all people.

Friends, in a world such as ours, it is easy to lose hope. It is easy to numb ourselves against the scandals of poverty, injustice and greed, and pretend that there is nothing we can do. But hear this. When we lose hope, God does not. God continues in hope for a creation renewed in the power of the resurrection. God continues to hope that we may share that longing, and be transformed ourselves, as Christ was transformed. God, you see, is extremely patient in hope. Matthew’s parable of the weeds and the tares tells us that God persists in the belief that no matter how many evils may grow in the world, or in the souls of women and men, that these evils will never have the power to finally overrun all that is good and true and beautiful. In the end it is God, and not death and evil, who will prevail.