Mysteries of the Kingdom

In the beginning, people saw things clearly in Palestine.  There were a chosen few who were born to wealth and privilege, while thousands of others were born to sweat and be hungry and die in childbirth.  There were the godly citizens who knew and obeyed the law of Moses to the tee, tithing even the herbs from their garden because they believed God had commanded it.  And there were the godless citizens who were estranged from God because of the sheer impossibility of their obeying the law—the widow without family to care for her, who sold her body to survive, and so could never aspire to the cultic cleanliness required by the law; the landless peasant, who struggled under the weight of Roman taxation, who had literally nothing of value to tithe at the temple; the slaves, whose bodies belonged to the ruling classes, who must do as they are told, even if so doing contradicted God’s command; the demoniacs and lepers, haunted by the evils of colonial rule, rendered godless by their manifestation of all these injustices.  In the beginning, people saw things clearly in Palestine.  There were those who were wealthy enough to be godly if they wanted to, and there were those who were so poor that godliness was not even an option.  Apparently, God had made it so. 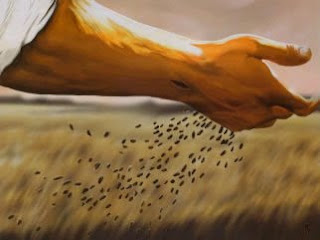 But then there came a man who took away their sight.  He spoke to them in parables, strange, subversive stories in which all they had come to believe and rely on was questioned, changed and transformed from the bottom up.  He told them of a sower sowing seed in a field.  Some of the seed fell on a path, where the birds came to eat it before it could take root.  Some seed fell on rocky ground where the soil was scarce.  It sprang up quickly but died for lack of room to put out roots.  Other seeds fell amongst thorns which choked the young plants as they grew.  But the seeds that fell on good soil grew well, bringing forth a huge harvest.  On hearing the story, people felt a shiver down their spines.  The rich and the godly felt a shiver of fear.  The poor and the godless felt a shiver of hope.  The shiver was an invitation to change, to abandon the old way of seeing and embrace the new.  Sadly, most of the folk who experienced that shiver walked away.  Such change seemed either too much to hope for or threatening to the very core.  They returned to the way their lives had always been, to their habitual way of seeing.  It seemed safer.  But some folk, a small few, felt the shiver and knew it to be divine.  They spent time with the Parabler, the teller of stories, and learned the secret of his vision.  They left everything, weather wealth or poverty, and followed him around the countryside.  Slowly but surely, that shiver did its work.  Their hearts became the good soil in the parable.  Slowly they became people in whom the reign of God could grow.

Many years after, the Parabler became himself a parable.  In the hands of St Paul, he became a story which sent shivers down the spine of all who heard it.  A story about finding life in the midst of death and acceptance in the midst of rejection.   In the hands of St Paul, the Parabler became a story which caused Jews to stumble and was sheer nonsense to almost everyone else.  Why?  Because he invited the hearer to change, to put off the old way and take on the new.  He invited the hearer to let go of all she or he thought they knew and embrace an enigma, a secret, a mystery from God that could change the world as we know it.

Now, you will often hear people say that the telling of parables were Jesus way of making complex things simple enough for almost anyone to understand.  You will sometimes hear people complaining about preachers and theologians who so complicate the simple gospel that few can understand it.  'Why don't they just tell simple stories, stories, like Jesus told', they say, 'then everyone could understand and the gospel would not be so mysterious'.  Unfortunately, that is not what parables do at all – not in the ministry of Jesus, nor in the ministry of the church.  Let me quote to you the bit of the gospel that the lectionary left out this morning:


Then the disciples came and asked him, ‘Why do you speak to them in parables?’ He answered, ‘To you it has been given to know the secrets of the kingdom of heaven, but to them it has not been given. For to those who have, more will be given, and they will have an abundance; but from those who have nothing, even what they have will be taken away. The reason I speak to them in parables is that “seeing they do not perceive, and hearing they do not listen, nor do they understand.” With them indeed is fulfilled the prophecy of Isaiah that says:

But blessed are your eyes, for they see, and your ears, for they hear. Truly I tell you, many prophets and righteous people longed to see what you see, but did not see it, and to hear what you hear, but did not hear it.

Parables, Matthew tells us in the bit which the lectionary leaves out, are stories which convey the secret of the kingdom of heaven.  The word secret, in Greek, is mysterion, mystery: an enigma or ‘dark interval’ which evades understanding.  While Matthew wants us to divide humanity into those who understand the parables and those who do not, is there not a sense in which the word of God persists in its mysteriousness, as much for those within the circle of faith as for those without?

If that is the case, then it may be that the meaning of Jesus’ preaching has eluded many who claim that the parables are simple stories with simple meanings.  In the light of this I am troubled by those who, for example, would like to reduce the meaning of this parable to a description of those who are 'in' the community of faith and those who are 'out'.  In fact, each of us comprise both the bad and the good soil.  Each of us are, at different times in our lives, both receptive and non-receptive to the gift of the kingdom.  I, myself, sometimes lose faith and hope when I see the power of radical evil, in the Sudan, in Palestine or in Washington.  I myself lose faith and hope in God when troubles come along, or when people patronise me because I am a Christian.  I myself lose faith and hope because of that drive to be socially and financially ‘successful’.  I myself am subject to all these things.  So the certainty of some about those who are in and those who are out is not a certainty I can share.

Perhaps, in such re-telling of the sower parable, some preachers do not give enough attention to something else which Jesus said (and, again, we find this in the part which the lectionary leaves out).  Jesus also said, and Matthew reports this, that the understanding of the mysterion is a gift, which in Greek is dedotai, donation.  Now, if even our capacity to understand God’s word is a gift, then who can boast?  Who can thank God that their heart comprises good soil, while another’s does not?  And who, in the end, can know who is in an who is out?  Who can know if they’ve really grasped the mystery of the kingdom?

Now that, that little detail, preserves for me the original subversiveness of the parable and the Parabler.  That little detail, that the word of God is a gift which ever remains a gift, reminds me that what I see and what I know of God and his ways are mine not because of my status and history in the community of faith, but by virtue of God’s love and grace alone.  There is no reason, therefore, for me to look upon myself as either an insider or an outsider.  All who know something of God’s love and liberation, whatever their status in terms of spiritual affiliation or godliness, do so because of God’s grace.  No more.  No less.  Grace is the great leveller, the great parabolic subverter of status, even and especially within the realm of the Spirit.   Friends, if we could grasp that, then we would also have grasped that there is nothing to grasp.  For it is only by letting go of all we know, only by relinquishing that tribal need to define who is in and who is out, that any of us shall, in the end, show forth a kingdom which is from God.  In the end, that is all that is clear to me.  But it is enough.