On mourning, the Crown, and Anglican coloniality

Since the 8th of September, when Queen Elizabeth II of Britain died, our local Australian media have been covering the fact, and its aftermath in church and state, on a 24/7, 7 days per week basis. The coverage has been total, a veritable tsunami of reporting on the minutiae of royal goings-on, along with opinion pieces in their thousands on the Crown, its legacy, its rituals, and its future.  The ABC, our national broadcaster, has even required its presenters to don black, as a sign of sorrow.

If it was never clear before, it is clear now: we are a colony.  Our head of state is the sovereign of Great Britain. Our politicians, along with our judicial and military officers, have to swear their allegiance to that sovereign. The legislation generated by our parliaments requires royal assent. When the Queen died, our Prime Minister suspended parliament and declared a national day of mourning, to be observed on Thursday the 22nd of September. He, the Governor General, the Leader of the Opposition, and a carefully selected group of prominent Australians, will attend the Queen's funeral in London.  We are a colony.

Most people I know personally, regardless of ethnicity and origin, seem able to distinguish between a certain sympathy for the royal family and the British people in their grief and loss, and the Crown as an institution and arch-symbol of empire.  This distinction enables them to generate real feeling for those who mourn, without, at the same time, losing the capacity for critical assessment when it comes to the brutal legacy of the Crown both at home and in the colonies. 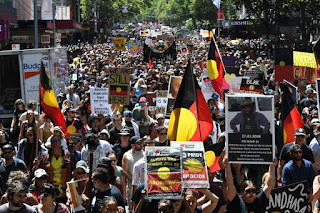 I'm aware of many others, however, who will abide no critique at all, who see every word of critical analysis as an attack on the person of Queen Elizabeth herself.  Much of this sensitivity comes, in my observation, out of a belief that her late Majesty was a person of exemplary moral integrity who (unlike some members of her extended family) could do no wrong. This moral integrity is then able to, through some syllogism of the imagination which I struggle to comprehend, cover the institution of the Crown as well. Elizabeth was good. The Crown was Elizabeth. Therefore the Crown is good. Something like that.

Several commentators* point out that the imputed 'goodness' and homely 'ordinariness' of the Queen is not something that can be easily and independently established. For the almost hagiographic image we have of the Queen is most likley that which the Crown, and the Crown alone, has sought to project.  The Queen's image, in other words, has been carefully constructed by the Crown over decades with the willing complicity of Her Majesty's Government and the world's most influential media. In fact, very few people know the Queen as a person in much depth at all. And those people are most unlikely, given the positon of the Crown at the apex of power in Britain, to succesfully offer a counternarrative.

The 'goodness' of the Queen as a person, insofar as that can be independently established, contrasts rather starkly, however, with the institution of the Crown, which is clearly and incontestably one of the most evil and exploitative institutions to have ever walked this earth. Even if one were inclined to separate the Crown from the actions of the British government during the colonial period - during which millions of Indigenous peoples had our lives, lands and cultures stolen from us at the point of a gun - there can be no doubt that the Crown has benefited enormously from such exploitations. Forbes estimates the Queen's personal wealth at something like $500 million US and the total assets of the Crown at roughly $28 billion US. Amongst the many assets personally belonging to the Queen (and now to King Charles) are artefacts - jewellrey, for example - stolen from the colonies. Significantly, the Crown pays no land, capital gains or inheritance tax. And it receives substantial salaries for the principle royals from the government of the day.

The distinction (if there is one) between the person who was Queen Elizabeth and the Crown as the principal symbol and beneficiary of an empire that raped and pillaged its way across the globe, also seems largely lost on Anglicans, even Australian Anglicans. Of course, I can understand members of the Church of England doing so.  For they are bedfellows, with the Crown, in the Establishment. Their bishops sit in the House of Lords and their monarch is the 'Supreme Governor' of the Church of England, who must assent to the appointment of any new bishop. This means, amongst other things, that the Church is required to preside at many of the key ceremonies of State. Weddings, funerals, coronations and the like. It also means that the Church is culturally attached to the Crown. Its official liturgy encourages prayers for the sovereign to be said at least weekly. And the royal anthem, 'God save the King', a victory song of empire, is regularly sung in ceremonies presided over by the Church.

But I've been suprised at how much of this liturgical royalism also pertains to Australia, and to the Anglican Church of Australia. Apparently many Anglican cathedrals are quite happy to accede to the expectations of state, and especially of Governors and Governor-Generals, when it comes to the celebration of the Crown. St Paul's Anglican cathedral in Melbourne, for example, recently held a service of 'Solemn Choral Evensong to give thanks for the life of Her Majesty Elizabeth II' which was attended by the Premier and the Governor of Victoria, along with many civil servants. Bishops and cathedral deans from elsewhere in Victoria also participated in the service. The usual service of evening prayer was modified, in this instance, to include the following:

As an Aboriginal member of the cathedral congregation, these modifications shook me considerably. For the cathedral administration made it clear, in this instance, that a relationship with the state and its expectations was of more importance that a relationship with us and our aspirations towards justice.  In conversation with the dean afterward, it also became clear that he regretted that this was so, and was open to a conversation about doing things rather differently the next time around. And yet. The status quo became starkly and alarmingly clear.

Of course, I have no objection to Christian people praying for the royal family and the British people in their grief.  I'm just astonished that a church which makes no mention of the British Crown in its constitution would want to celebrate that Crown in ways that so unfeelingly rub British coloniality in the faces of those of us who have suffered most at its hand.  Particularly, I might say, in a service of evening prayer in which the revolutionary words of the Magnificat (as recorded in the Book of Common Prayer) are regularly sung:

He hath put down the mighty from their seat:
and hath exalted the humble and meek.
He hath filled the hungry with good things:
and the rich he hath sent empty away.

I'm aware, also, that the St Paul's service was by no means the worst example of such ongoing obesience. There are many others, services in congregations the land over, that went (and will go) much, much further in their royal fervour. One example is a 'Requiem Eucharist for Her Late Majesty, Queen Elizabeth II' held on Sunday morning, Sept 11, at St John's Church in Malvern, Victoria. In addition to the inclusion of the royal anthem, this service also displaced the ordinary for the day from A Prayer Book for Australia and included an intercession for 'our Sovereign Lord, the King'. There was no acknowlegment of country whatsoever.

These recent liturgical outbreaks of colonialism in fact reflect a deeper and more difficult problem in the Anglican Church: it's almost complete disregard for Aboriginal and Torres Strait Islander people and our attempts to be part of the church - not as honorary whites, but as ourselves.  Despite guarded acknowledgments of the Church's willing partnership in the genocidal actions of the Crown in days gone by, the Church struggles to do anything meaningful when it comes to designing a more inclusive and just future.

Yes, the Church now has NATSIAC, a national council of Aboriginal and Torres Strait Islander people. But this body is massively underfunded and has no constitutional or practical power to do anything else than meet.  Individual dioceses, and the General Synod itself, can completely ignore what it says, and regularly do.  Most of the members of NATSIAC are also appointed by diocesan bishops rather than elected by Aboriginal and Torres Strait Islander people.  And the numbers are heavily weighted toward the north of the continent, where so many of our people still live out of a 'mission mentality' when it comes to relationships with the Church. These factors mean that NATSIAC remains a fundamentally conservative body when compared with the more progressive work of Indigenous organisations outside the church.

And, yes, we have a National Aboriginal bishop and upwards of twenty deacons and priests around the colony. But most of those priests and deacons work in mainstream white or multicultural congregations, because there are few mechanisms in the Anglican Church for supporting us to work in communities with higher proportions of Indigenous people, or even to work on special projects seeking to progress the fortunes of our people in the Church.  Those who work in remote communities, for example, are rarely paid. They depend upon aged or disability pensions to put food on the table.  The National Aboriginal bishop, himself, is funded for two days per week. Two days to offer care and encouragement to Aboriginal leaders across the entire continent. Two days!  And, despite the NATSIAC canon making provision for one, there has not been a National Torres Strait Islander bishop in many, many years. Apparently the money is simply not there, which is church-speak for 'not a priority'.

So we are a do-nothing church when is comes to improving the lives and meaningful participation of Aboriginal and Torres Strait Islander people.  If the Church really cared for us, it would gather the resources to do at least some of the following:

Just for starters. In the Province of Victoria, Aboriginal clergy put such things on the table back in 2018. Neither diocesan councils, nor the Provincial council, have yet troubled to respond.

We could do this, if we wanted to. If we really and truly believed in justice rather than in the continuing sovereignty of the Crown over those it raped and plundered.

* For example: Edward Owens, The Family Firm: Monarchy, Mass Media, and the British Public 1932-53 (London: University of London Press, 2019); Christopher Hitchens, The Monarchy: A Critique of Britain's Favourite Fetish, Diamond Jubilee Edition (London: Vintage Books, 2012); and Tina Brown, The Palace Papers: inside the House of Windsor - the Truth and the Turmoil (Melbourne: Penguin, 2022).