Why I most often speak from my trawloolway, rather than my european, heritage

A friend recently asked, via social media: 'I am interested in why you have chosen to align yourself so closely with your trawloolway identity. How do other elements of your ancestry inform your identity, and why do you not speak so much about them?'

This is actually one of the most frequent questions our mobs are asked by non-Indigenous Australians. The answer, for me, involves an invocation of both historical-cultural and theological perspectives.

Every single Indigenous person on this continent is of mixed heritage. Before colonists came here, that heritage was mixed through entirely voluntary forms of intermarriage, diplomacy, and cultural exchange between nations. From the time of first contact with european colonists, that strictly local heritage was forcibly repressed by the removal of people from country and from each other. All of us, without exception, especially in the south and east of the continent, found ourselves in all-to-majority-white communities in which we were forced to put aside our Indigeneous heritage and become honorary whites. It was also expected that if we must marry, it would be to white people. Of course, many of us were simply sterilised so that reproduction became impossible. The policy of colonial governments was, for 150 years, to 'breed out the blackness'. Blackness, of course, is not only about skin colour. It is about culture and identity. It was, and remains, a deeply archetypal cipher of everything that the european mind considers foreign and not entirely human. 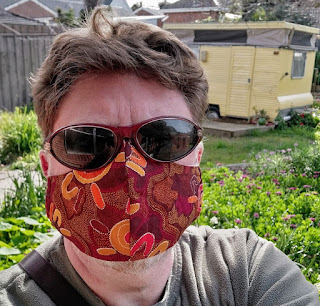 Many of us who have inherited an Indigenous heritage - however fragile, however unwelcome - feel very strongly about identifying with that heritage in the strongest possible terms. Why? Because we feel a responsibility to give voice and form to that dimension of who we are which has suffered the most, which is least welcome in this community, which struggles the most and has less resources to hand to encourage such speech. By contrast, the heritage which we share with other members of the wider community - especially the white community - has no need to so assert its voice, because it already has one. It is reflected in every advertisement, every TV programme, every educational programme, every place of worship, every symbol of belonging, every social imaginary. It is not so with Indigenous heritage. Personally, I feel a long and deep responsibility to speak from my Indigenous heritage not only because I AM Indigenous - ontologically connected to the place where I live - but because it is my Indigenous self that is most fragile and at risk in colonial Australia. It is the dimension of my identity which needs the most support and encouragement.

If I might add a theological dimension to that, St Paul says in 1 Corinthians 1:26f,

There is a call in my own, and every, Christian vocation to amplify those dimensions of identity and status that remain most despised by the powers that rule the world: those whom the world regards as 'nothing', of no or marginal value. Indigenous people, Indigenous culture, Indigenous identity, still occupy that place in colonial economy and society. But that is what joins us with Christ, who was sent to join with the weak and powerless to shame the strong. I work from that place in the matrix of my identity because I am a Christian, and have been joined to Christ in baptism.

All of which is to say that giving attention and prominence to my trawloolway heritage does not feel like a choice so much as an irresistible calling, a call that comes from country and from Christ. Both.