The Stone the Builders Rejected

When a rock begins its long and tumultuous journey from the mountains to the sea, it is rough and jagged.  As the waters of many seasons push it along its way, the rock starts to lose its jagged features.  They are worn away by a continual process of bumping and bouncing against other rocks.  After an age, when the rock finally gets to the mouth of the river, most of its edges are gone.  Its surface is smooth and silky, like the texture of the water in which it has journeyed.  And it sits, with other rocks, amidst the debris of its own making, gleaming with the splendour of its own peculiar colours and personality.

The reading from Matthew refers to a stone which is at first rejected for a building project, but later recognised as the quintessential stone from which to assemble the whole building, the ‘key’ or ‘cornerstone’, as it was sometimes called.  The stone, in Jesus’ story, is the messiah whom God sends to collect the fruits of the harvest, whom the Jewish leaders beat and kill. It is Jesus, the one who will rise from death to become the cornerstone of a new community and a new creation. 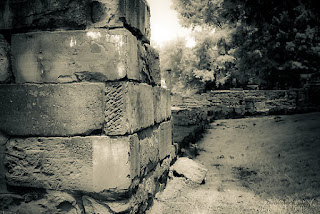 All people are like stones, are they not?  As rocks emerge from the mountains and make their way to the sea, so the newborn baby is destined to pilgrimage.  And who can tell what is ahead, or where the journey will end?  Along the way we are inexorably changed.  In a relentless dance of choice and circumstance, we wander through the landscapes of becoming.  Sometimes we are able to choose the next move.  We can decide how to change.  At other times, we are pushed and cajoled by the forces of heredity and environment, beaten into a new shape by violence or indifference.  Who can tell what will happen next?  The past is irrevocable, the future is uncertain.  But change rolls on like a tidal wave.  Note this too, there is no such thing as a painless change.  With each change there is loss, and grief at what is lost, and the struggle to grasp hold of all that is new and the different.

For many people, change is simply change.  It has no meaning or purpose.  The years roll by.  The landscape changes and so do people.  But there is no sense of destiny in it all.  There is no purpose.  From the perspective of faith, however, every life has an identity and purpose.  God holds us in divine care, so that no matter what changes come, we are known by God and purposed by God to be what we are, and to become what we will become.

This is what God purposes for each of us: that we might become like Jesus, the stone the builders rejected.  When Paul says that he wants ‘to know Christ, and the power of his resurrection, and the fellowship of sharing in his sufferings’ he is saying that he wants to become like Jesus – truly, madly, deeply like Jesus.  He is saying that this goal has consumed him, that all else in his life –every other goal or pursuit – has become as rubbish compared with this yearning to be joined with Christ in a mystical sense of co-identity.  For that is what ‘knowing’ means in this extraordinary passage.  The Greek ‘gnosis’ draws on a rich field of meaning which emphasises not knowledge about some reality, but an active participation in, and engagement with, that reality.  To know Christ, then, is to walk with Jesus from Bethlehem to Jerusalem.  To be born with Christ.  To grow and to wonder with Christ.  To be tempted and perplexed with Christ.  To teach and to heal with Christ.  To be angry with Christ.  To love with Christ.  To be rejected and betrayed with Christ.  And to die with Christ in that impenetrable sense of abandonment.  To know Christ is to become his mother or his friend, the one who walks with him all the way to Golgotha, there to witness the wonder of his resurrection.

Lil and I saw a fantastic film a few years ago, a film called Good Will Hunting.  It’s about a young man who grew up in the Irish precinct of Boston, whose mother died when he was very small, and whose alcoholic step-dad beat him black and blue with a wrench whenever he came home drunk.  The boy, whose name is Will, grows up protecting himself from every kind of intimacy, from every possibility of challenge or change, because he believes, deep down, that love will always turn to abuse, eventually.  He is a very smart young man, who happens to possess an eidetic memory and an extraordinary gift for mathematics.  He has read, and can quote verbatim, many of the great works of history and philosophy.  But all of this is used not to explore the world and be transformed, but to build a shining barrier which can protect him from relationship with others.  But the day comes when Will has to make a fundamental choice.  After beating a guy up, a guy who used to do the same to him when he was a kid, he finds himself in jail.  And the only way out is to agree to meet with a therapist for an hour a week.

The therapist turns out to be a fellow called Sean, played brilliantly by Robin Williams.  Sean is no theoretical therapist.  He is a man who struggles, daily, with his own pains and griefs.  But he does so with courage and truthfulness. Sean is able to challenge Will to get out of his armour, which, while very effective at keeping the pain of the world out, is just as effective at locking Will inside a private hell. Through a difficult and dangerous journey, Will is cajoled and persuaded to be truthful and confront his fears about relationship.  Eventually, with Sean as guide and friend, he finds the courage to enter the real world once more – the world of love, intimacy, risk, and vulnerability.  And it is an amazing journey to witness.  Like a rock making its way down the mountain, Will is beaten and bruised.  But all the while, little by little, his beauty emerges.  His individuality, his uniqueness, his infinite value.  And all because a wounded man pressed beyond his own fears and reached out with care and compassion.

Sean is a clearly a Christ-figure in this movie, for Christ is one who, with love and courage, reached beyond his own fear and panic and woundedness to love God and care for his neighbour.  He is one who embraced the world and was changed.  He is one who suffered the pain of change.  But in the process he found his deepest self, a self hidden in the life of God.  This is what God wants for all of us, too.  To respond to life in all its fullness, after the way of Jesus. This is the meaning of our existence.  This is what we are here for.   We are not here to accumulate wealth.  We are not here to acquire or even yearn after our neighbour’s property.  We are not here to kill, maim or lie about the ones who will not do as we wish they would do.  No, we are here to love and to honour God in the way that Jesus honoured God.  Even unto death.

When a stone reaches the mouth of the river, it is no longer the stone it was at the top of the mountain. By dying to what it once was, it is able to come alive to the goal and the purpose of its becoming. We are the stones of God.  God want to build us into a holy temple, which is beautiful to the eye, and able to host the symphonic music of all that it means to be creatures beloved by God.  But we can never become what we are purposed to become unless we put away our self-centred ambitions and submit to the way of Christ, ‘becoming like him in his death, so that, somehow, we might attain to the resurrection of the dead’.  Today I challenge all of you.  Stop hiding inside your fears about change.  Allow God to embrace you with his love and his care.  Be transformed.  Be healed. Become fruitful for the sake of the kingdom.